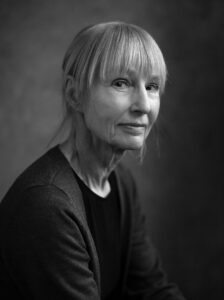 Carola Hansson was born in Stockholm in 1942. She is married and lives in Stockholm after having resided for many years in Uppsala, where she has conducted studies in history of art, philosophy, history of literature and the Russian language. Between 1979 and 1988 she worked as a playwright for the Swedish Television and in 1980 she published, together with Karin Lidén, a much discussed book of unofficial interviews with Soviet women, Moscow Women.

Carola Hansson made her literary debut in 1983 with the novel Det drömda barnet/The Dreamt Child. Her breakthrough came in 1994 with the novel Andrej/Andrey, about one of Leo Tolstoy’s sons. Steinhof, published in 1997, also found favour with both critics and public. Both Andrey and A Complaisant Man were nominated to the August Prize. Today, Carola Hansson is regarded as one of Sweden’s most important writers.

Her novel, The story of Masja, the daughter of Lev Tolstoy, is a touching story of a woman’s fate and touches issues that are highly topical today. The novel is carried by a language that is clear and transparent, the sentences are long and winding, rhythmic and varied; To read The Story of Masja is a beautiful experience. It is a rich and magnificent novel, nominated for the August prize 2015 and was shortlisted for the Swedish Radio Novel Prize 2016.

Her new novel, Threads of Memory (Minnestrådar) was released this fall.

Carola Hansson’s works have been sold to Germany, Finland, Lithuania, the Netherlands, Russia, Switzerland, China, Ukraine and Great Britain. She has been honored with several awards, among them The Bonnier Prize, Signe Ekblad-Eldh Award, Swedish Radio Novel Prize and more.